If you haven't already seen the spreadsheets, you'll soon find out this is not your normal EQ raid.  First off it requires you to split your raid force multiple ways to handle 4 different towers simultaneously.  Each tower has different mechanics, mobs, ae's, and abilities... and each class is either negatively and/or positively affected by what tower they enter.  This makes for an awfully fun time learning the event and relaying back and forth constant info to figure out each class X four towers.  This usually drives your guildy who searches lucy spell effects insane. VERY INSANE (get the spreadsheets trust me). Once the information is figured, it comes down a full raid executing correctly on all parts just to get the boss to spawn, let alone die.  If you slack in any one area, you pay the price in the end.  The final boss of the raid can be one ruthless bastard, or he can be a pushover... thankfully for us he decided to fall over dead on our 2nd spawn, after we unceremoniously figured out the power up mechanics the first time!

After we destroyed the Pillars and their ability stealing boss, we moved onto Windsong.  This is one of the easier raids in T4 so far, and one of the most amusing.  My favorite part was the first time instruments spawned, and decimated robes everywhere.  Once we figured out a few ways to deal with those, this raid was as simple as my morning shampoo instructions... lather, rinse, repeat.  We did just that and shoved their flutes right down their throats! 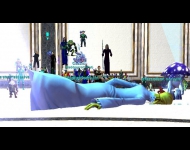 With a nice quick refreshing pinata like Windsong, what better way to ruin your day than with an event with a horribly broken script, 100k ae's, zonewide snare/mana drains, zone AEs, adds with shitterlings or clones if people don't cure, silences, vortexs, pushbacks, summons that redirect you(FU devs on that one really), broken ports,  and I'm probably forgetting others.  Well ladies and gentlemen, welcome to your own personal hell, City of Bronze.  This event took us some time as we had zero info, and with an event that has emote warnings, yet doesn't fire said emotes due to a broken script at times, it can make for some trying times.  We went hard at this one making progress section by section, piece by piece until finally it fell before us.  This is another one of those events that makes for an epic feeling when you finally pull off the win, as this truly tests your entire raid forces ability, and makes for a solid gatekeeper to the final zone of Veil of Alaris.  With our first three T4 raids down, we unlocked our access to The Sepulcher of Order.

Sepulcher's first raid, Two Faces, One Vision, I must admit made me feel a bit dirty.  We were fortunate enough to beta this event, and to see what it became after the beta was a bit of a let down.  The best part however, was watching as everyone in the guild forget about the PBAE of DOoOooooOoOM on the first run, and being the only person to remember it and back away.  The joy that can be had watching your entire guild drop before your eyes while you sit back and laugh is a moment I won't soon forget!  After doing our best cult mass suicide, we promptly proceed to smash this event in no time flat.  What was a mean event in beta that required alot more killing with alot less reward, and had a ruthless final phase, became a weak shadow of itself that simply puts out loot in a few minutes flat.  I'd love to see some tweaks made to this one, but I'd love to see epic ornamentations & my ham that Mulleg never sent me... and those my friends probably won't ever happen.

Sepulcher 2.  What can i say about Sepulcher 2 except this...

That's right.  He's got the idea down.  Trogdor would decimate this raid much like he decimates the peasants and the countryside.  We decided to take a page from our old friend Trogdor, and burned the pants of the boss of this raid in ~2:30.  Why you might ask?  Well kids, because Sony can't program to save their ass.  This piece of shit was broken since day 1 and just got a fix this past patch? I'm not sure... either way it's not going to change what's going to happen every time we get here.  BURNINATING... countryside, peasants, broken events, its all the same to us! 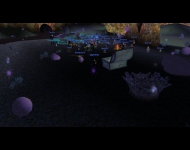 After arguably the fastest event in T4, we got to smash our heads into the real Worldbeater of this expansion, Fumerak the Quintessence.  Like the Wu-Tang clan, 60k hits ain't nothin to mess with.  This guy drops unsuspecting tanks instantly and comes hungry for more.  Even when he's not powered up he still hits like a truck.  Some nasty mechanics along with ugly AE's paired with a random cure sequence that increases as the event wears on makes for great times.  Toss in clusters of adds that have fun abilities like blind & vortex... and can hit upwards of 40k themselves, and this event is every bit of the Worldbeater title its labeled.  We put our heads down, soldiered through, and worked this event for a week straight until we finally got a good solid run, a few lucky clicks, and we were rewarded with the completion of one of the best scripted, yet incredibly cryptic events in the history EQ . 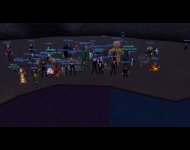 We even found some time in our busy schedule to destroy the  new anniversary event.  This years edition was of Tower of Frozen Shadow, and features some familiar faces from back in the day.  We got to smash through our old friend Zi-Thuuli (yes he did surprise us mortals), Maestro, Valdoon, and even Mayong Mistmoore made an appearance.  Try as they might, nothing could keep us from taking this one down and collecting some VERY nice AC augs for our tank's shields.  As you can see, we didn't quite figure out the *proper* way to take care of adds our first run, but it didn't matter, as nothing keeps our tanks away from those augs!  Some of us have also been lucky enough to pick up what I consider to now be the best ornamentation in game, Erilynne's Ornament.  All in all, this years event was better than the last few, and the rewards are top notch. 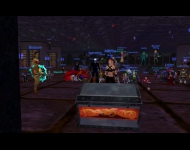 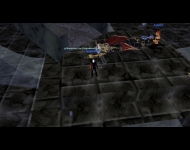 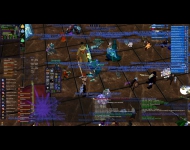 So thats pretty much it for now.  We're about ready to drop Sepulcher 4 (and actually have since Iggy wrote this update, <3 ade), and move onto the event that makes a piss bucket a required item while raiding... The Triune God. 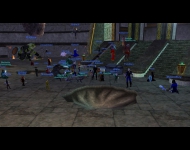